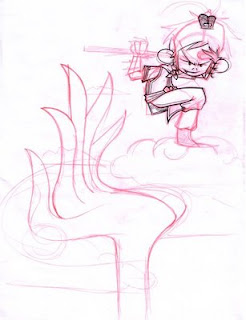 Here's a rough in progress of an illustration for the Monkey King (aka The Journey to the West). It's the part in the story where the Monkey King flies to the outer reaches of what he believes is in the universe when it's only the the hand of Buddha. I mostly wanted to test out a way to draw hands and I figure this would be a nice way of going at it since I've been meaning to do a decent illustration for the Monkey King in ages. I'll hopefully get around to doing one with the four main characters: the monk, the Monkey King, Pigsy and Sandy (the cannibal monk) who has this cool necklace of skulls and is sometimes depicted as a kappa (Japanese water demon). I'll hopefully finish this by week's end since I have Sunday off this week before the nice stretch to Christmas of work.
Posted by Brendan Hong at 11:48 PM